I decided very early on that the hero of my short movie would be someone who has already lost so much and will continue to lose much more at the end. The title Bridge No. 29 suggests another chapter in the miserable life of Glenn (Matt Seeley) who has a nasty habit of burning bridges. The movie stands as a cautionary tale for those unwilling to take personal responsibility for their mistakes until they are thoroughly helpless. Another meaning of a bridge is what people at the mercy of despair are compelled to jump off of.

The helping hand that Glenn is reaching for this time is Sandra (Julia Harnett), an old friend he hasn’t seen in a long time. Their reunion couldn’t be more awful. When we are introduced to Glenn, he has already betrayed Sandra by breaking into her home and enjoying its comforts. Glenn feels justified to trespass because he is newly homeless. Surely, anyone willing to let him starve and freeze would have to be truly evil. His friend Sandra wouldn’t be that awful! Sandra’s empathy, however, is being thoroughly tested by a toxic friend.

As the intensity of the tragedy rises, I have stirred the story up with a great deal of comedy – the kind that sets teeth on edge and builds to exasperated laughter. Remember when Rupert Pupkin (Robert Deniro) invited himself in Jerry (Lewis) Langford’s home in Martin Scorsese’s The King of Comedy (1982)? My other movie-related inspirations here include Ronald Bronstein’s Frownland (2007), Mike Leigh’s Another Year (2010), Noah Baumbach’s Greenberg (2010), and Andrew Semans’ Nancy, Please (2013). I also hope to make allusions to Robert Bresson, especially his film Mouchette (1967).

Both Glenn and Sandra are engaged in a fierce and highly calculated battle of wills. Glenn wants to squat and mooch off in Sandra’s one-woman pad. Sandra, however, wants to get Glenn out of her sanctum guilt-free. Glenn wants his dignity and his pride by ignoring his homeless status: He’s staying at a friend’s. By ignoring his own power to change, he continues to sink into a lonely and loathsome existence. 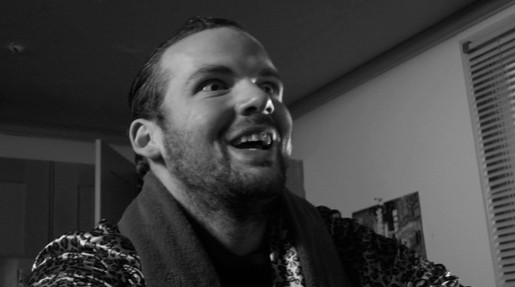 At the end, Glenn loses a great deal more of his dignity as well as a friend. Sandra also loses her sense of self when her own generosity is pushed to the breaking point. When Sandra appears to cave into Glenn’s flattery, it is important to question how sincere her hand on Glenn’s shoulder really is. Sandra uses his friendship to trick Glenn and seizes his moment (the kettle blowing) as her opportunity to gain higher ground. Glenn is trying to do the same with Sandra, but is more successful at being oblivious to his conning. What transpires between them can never be taken back.

My staging and framing of these characters has been thoroughly designed. Our understanding of their relationship changes as we realize that Glenn, in a moment of grace as he makes breakfast in – we presume – is his kitchen, is actually a thieving intruder. There is palpable tension between Glenn and Sandra as they fight for their own goodness as well as their conceptions of what makes someone irredeemable. 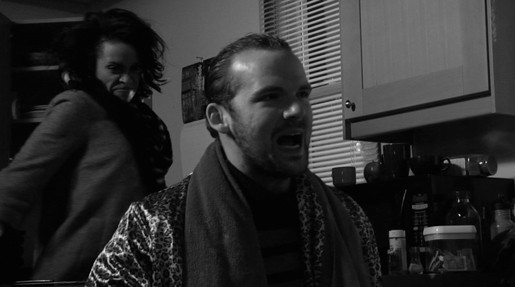 We expect that Sandra will welcome Glenn as her guest. Most audiences latch onto tidy resolutions of nobility and kindness whenever the sensitive issue of homelessness is present. I am resolved to stay true to the table conversation as a war over territory and souls. When Sandra finally achieves the coveted protective barrier behind the counter that Glenn first held, she presses Glenn’s hot button in order to match Glenn’s outrage with a horrifying charge and punishment.

Glenn is in dire need of help, but whether that makes her manipulative nature any less savory will have to be wrestled with by the audience. There is a delicate balance between how people see the needy and the exploitative. It is my hope that this unsettling drama shakes up spiritual and political sensibilities. Calls to action are more successful the more troubling and morally complicated they are. I call it “unsentimental humanism.”

4A-01
CU: Glenn STABS spoon into coffee seal. Startling. Subjective. Violence!
We’re in Glenn’s world of fury.
4A-02
CU: Camera TILTS UP and introduces us to Glenn. Calming. Catch your breath.
He smells the delicious coffee ground.
The lighting from the sunlight C-R gives Glenn a subtle glow against the dark shadows.

4A-03
CU: Camera TILTS DOWN following the coffee canister. The camera rests on the breakfast (and KNIFE + FORK) on the counter as Glenn fills his cup with coffee.
OFF-SCREEN SFX: BANG BANG BANG! Glenn drops the spoon in shock. Back to TENSION!

1A-03 (ALTERNATE)
The Master (MLS):
In one alternative take using the same setup from 1A-01 to 1A 03 (ALTERNATE), the camera PANS RIGHT AND DOLLIES IN to capture Sandra com- ing inside through the door. The Objective shot turns Subjective as Glenn would experience the rush and panic of Sandra’s entrance.
1A-03
The Master (LS): Glenn enters. He is silhouetted by dark shadows. Subjective/Separation: Glenn is focused on Sandra. The camera must follow Sandra

1A-04
MLS: Alec is iluminated a little more. “What the hell is this…”
DEMAND.
4A-04
CU: Glenn greets and welcomes the guy who broke through the door!
DISARM.

1A-05
MLS: Sandra drops her bag *THUD* on the table and swings the chair out to block himself. Glenn is diminished by Sandra.
4A-04
CU: “It’s just me… Glenn.” Closer… Glenn is assuring.

2A-03
MCU: COMMAND.
“Drop the knife and fork and sit down.”
4A-04
CU: Confliction.
Glenn didn’t mean to look threatening, but it SHAMES him anyway. We hear the KNIFE and FORK drop on the counter. SUSPENSE…

4B-01
MCU: Camera DOLLIES CAMERA LEFT and follows Glenn around the counter. Glenn walks C-R out of frame.
1A-06
COWBOY 2-SHOT: Camera follows Glenn walking closer to Sandra and the chair. Glenn is still holding onto his breakfast plate.


The lighting on Glenn is darker than it is on Sandra. Glenn is in a “bad light.”Glenn sits down looking up at Glenn submissively.

2B-01
As Glenn sits down into the OTS, the Camera DOLLIES CAMERA LEFT and pans to the right for the new frame. MCU OTS: Sandra towers over Glenn. “Why are you in my house?”

We go back and forth between these two shots. There is no escape until…

1A-04
MLS 2-SHOT: Sandra gives the go-ahead for Glenn to eat. There is more space to breathe. Glenn reaches for the knife and fork on the counter behind him.
2B-01
MCU: Back to INTENSITY!
“I said leave the knife and fork.”

3B-01
MCU: Glenn is SHAMED again.
He eats with his hands like an animal.
2B-02
MCU: Camera TILTS DOWN to follow Sandra as she sits down. She looks at Glenn with PITY. They are now eye-level.

3B-02
MCU: Glenn chokes on his food and spits it back onto his plate.
1A-05
MLS 2-S: Glenn reels back from gagging. The camera DOLLIES IN as Glenn com- plains about how everyone is against him.

3B-02
MS 2-S: DOLLY IN (con’t) The frame closes in on Glenn oppressively. Sandra is still in frame for her line: “And you just let this happen?”
3B-03
MCU Single: The camera DOLLIES IN (con’t) quicker. Glenn is all alone when he DECLARES: “Hey, I!m the victim here.”

2B-03
MCU OTS: The GRILLING continues. Sandra takes off her toque and leans in closer.
3B-02
MCU OTS: Glenn flatters…
He even tries to bargain…

2B-02
MCU: The kettle WHISTLES.
Sandra has her opportunity! “Relax”
2B-04
CU: Camera follows Sandra!s hand as it rests on Glenn’s shoulder for a few seconds. ASSURING.

4B-02
MCU: Glenn is relieved. It worked!
The framing is more unnerving. There is too much room for intrusion behind him. Sandra leaves the frame C-L
4B-03
MCU: Glenn is by himself again with room to breathe. Even the composition is more flattering.

3B-02
MCU: Staying on Glenn. Sandra walks in frame C-L behind the counter. She takes the kettele off the stove.
4B-04
MCU: Sandra appears meanacing again.
“Help me out here, Glenn…”

5A-01
CU (INSERT): Sandra’s hand picks up an egg from the carton. “What is your plan?”
3C-01
CU: Camera DOLLIES IN quickly as Glenn stammers and then… BLOWS UP! The camera is still and tight on Glenn.

2B-03
MCU: Glenn SCREAMS more.
Sandra turns around and pulls her arm back for a throw.
6A-01
CU (INSERT): Glenn’s angry BLAMING stops when the egg splatters behind his head. 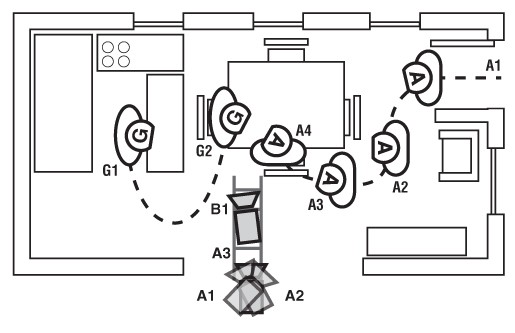 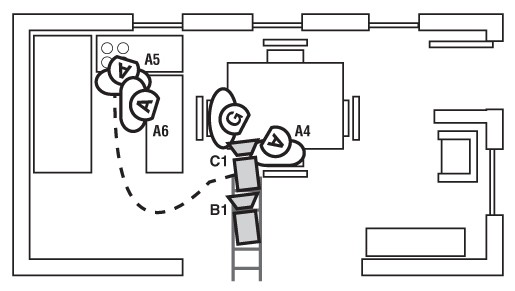 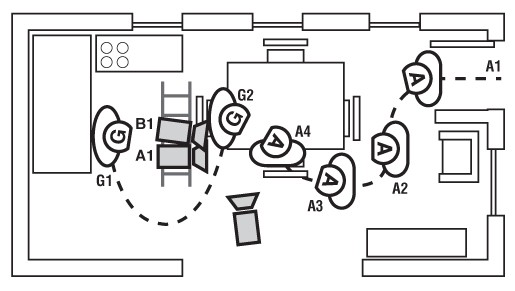 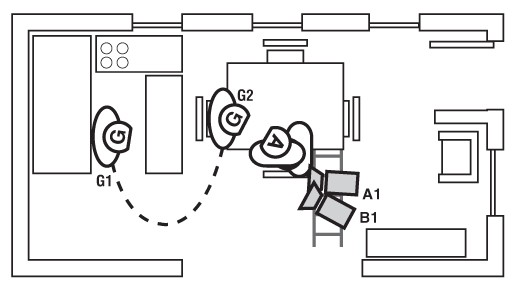 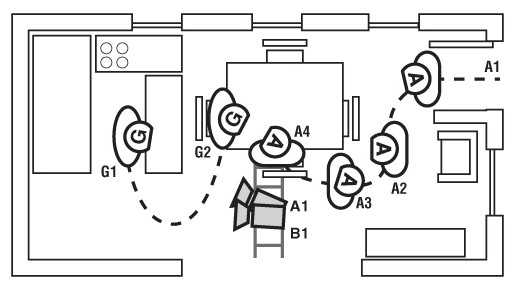 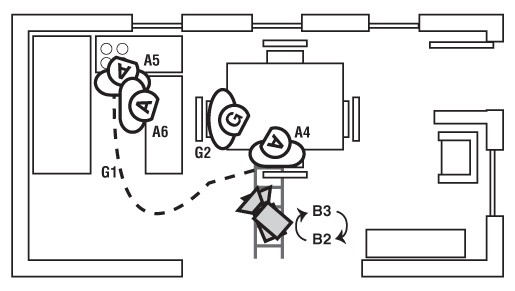 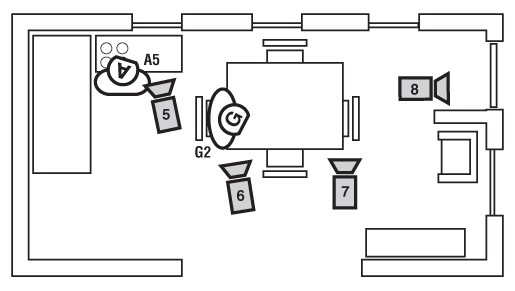 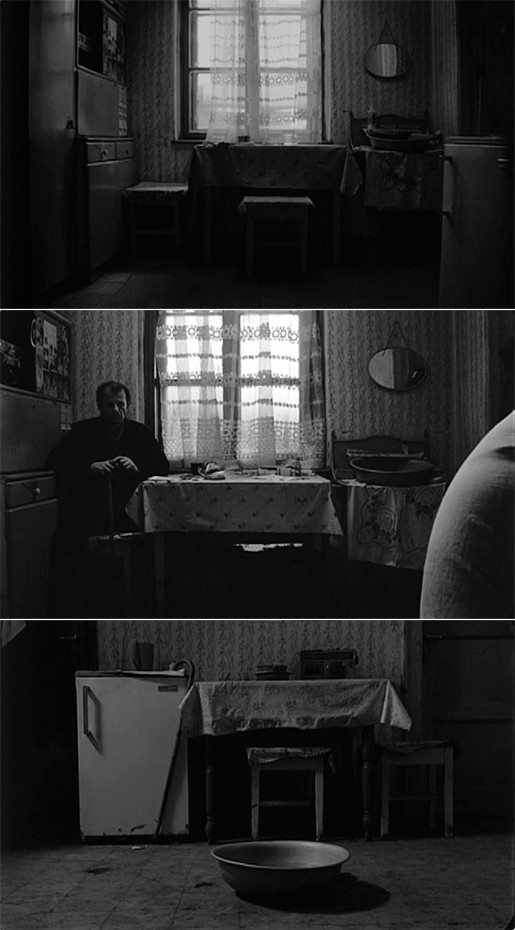 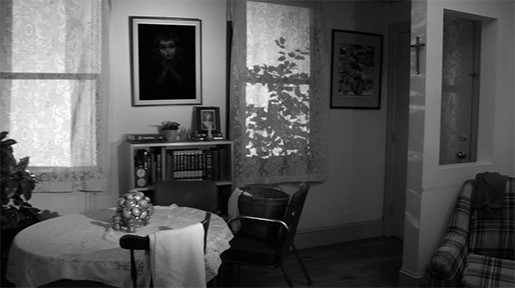 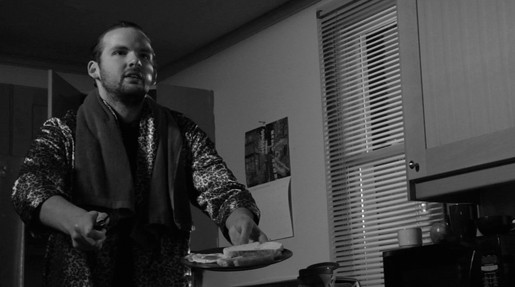 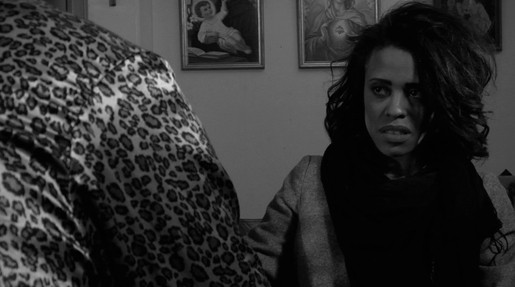 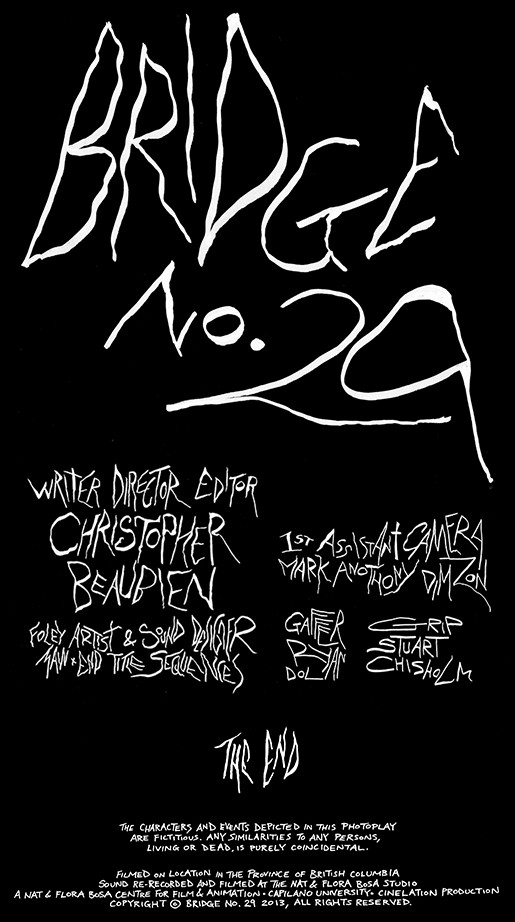 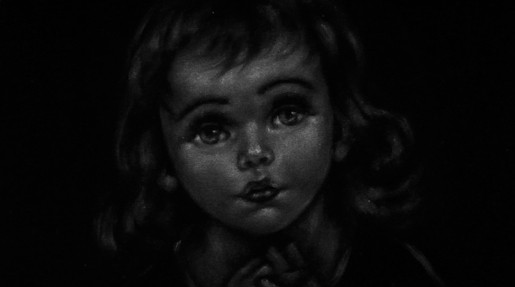